A little background on Battle Royale games before we get to our list of top free battle royale games.

Battle Royale is a genre of multiplayer video games that pits players against each other in s a quest for survival to be the last man standing. Common game play elements of Battle Royale games include survival, scavenging, crafting and construction. Many also feature game play on a large map which closes in around a point which players must stay within. The genre’s origin can be linked to a number of older games. Many multiplayer shooters since the late 1990s and early 2000s have featured a last man standing mode which is a primary element of Battle Royale games. Likewise the idea of a shrinking safe area can be found in early video games such as 1983’s Bomberman. Yet more aspects such as survival, crafting and construction come from more modern games such as Minecraft, Arma 2 and the Day Z Arma 2 mod.

Whatever the origin, the genre really took hold 2017 with the release Fortnite Battle Royale. In the time since then, the genre has exploded with more and more free to play battle royale versions of popular franchises coming to market.

The list that follows are what we consider to be some of the top (and best) battle royale games that are also completely free to play. So without further ado, click next or swipe left to start the countdown to the best free battle royale games. 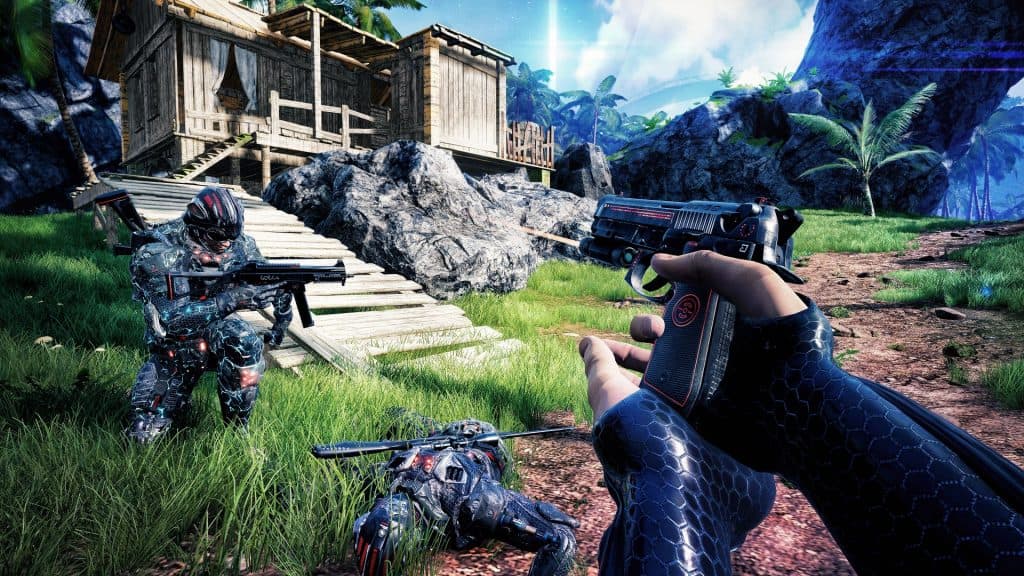 Islands of Nyne is a first person battle royale shooter that is currently part of Steam’s Early Access so it’s completely free to download and play. The game is set in a sci-fi world where players are dropped into alien built arenas. Players are dropped into this area and must immediately start scavenging for weapons and equipment while staying away from the plasman field that closes around them.
Microtransactions: None | Where to Download: Steam | Official Site

Warface is a free to play third person shooter that’s available for the PC, Xbox One and PlayStation 4 consoles. The game features a number of more traditional class based multiplayer game modes in addition to Battle Royale. In Warface Battle Royale the goal is to survive and eliminate. Players drop into the game map with melee weapons as they scavenge and search an ever shrinking area. The map in the battle royale mode is the largest map ever for Warface with more than enough areas to explore and hide… that is until the shield hits and starts shrinking the game world. Players can also earn a number of achievements during game play as well.

Classes include the Sniper, Rifleman, Engineer and Medic. The Warface Battle Royale mode does require the main Warface game.
Microtransactions: None | Where to Download: Steam | Official Site 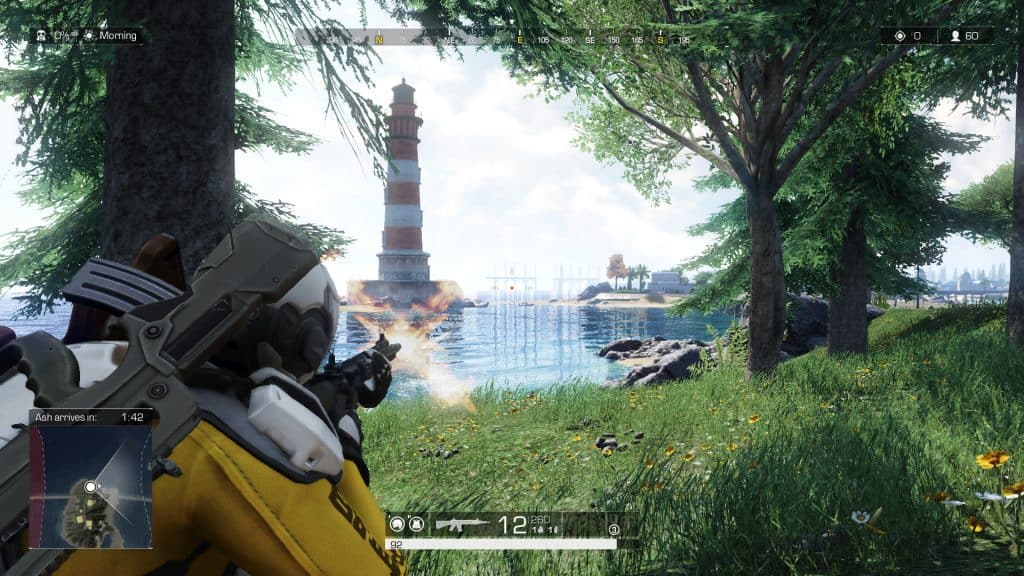 Ring of Elysium is a battle royale game where players are trapped inside an area that is being hit by natural disasters. The only way out of the disaster area is to board the rescue helicopter which has room for only four. Survivors must stay ahead of the storm and elimainte other characters in order to be one of the remaining four. Since its release in 2018, there have been three seasons.

Season 1 had sixty players trapped on a mountain as a snowstorm approached. Players were equipped with either a snowboard, climbing gear or a hang glider to help navigate the map. Season 2 which ended in March 2019 was set on a tropical island with players having to escape a cloud of volcanic ash. Starting equipment options included a hang glider, BMX bike or grappling hook. Season 3 released on March 27, 2019 is set…
Microtransactions: None | Where to Download: Steam | Official Site 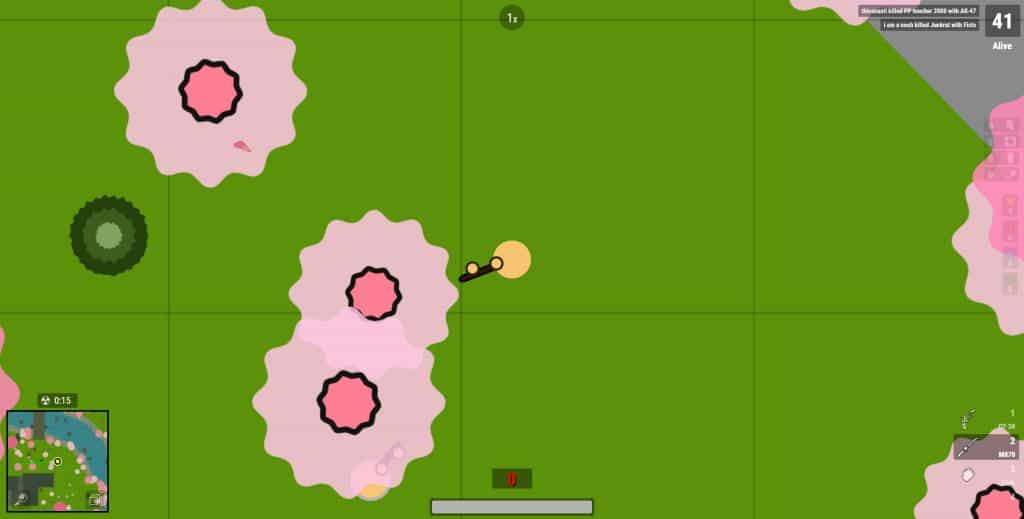 Surviv.io ius a free browser based multiplayer battle royale game released in 2017. The game play is similar to other games in the genre except Surviv.io is played from a two dimensional top down view. The game supports solo, two player teams and four player team modes. Players are 2D circles that must stay within the shrinking red zone. Armed only with their fists players must search for weapons and equipment. Gear includes armor, backpacks and weapons. Weapon types include handguns, shotguns, sub-machine guns and assault rifles. There is also a wide range of melee weapons as well. Surviv.io is also available for iOS and Android devices.
Microtransactions: None | Where to Play: Surviv.io | Official Site 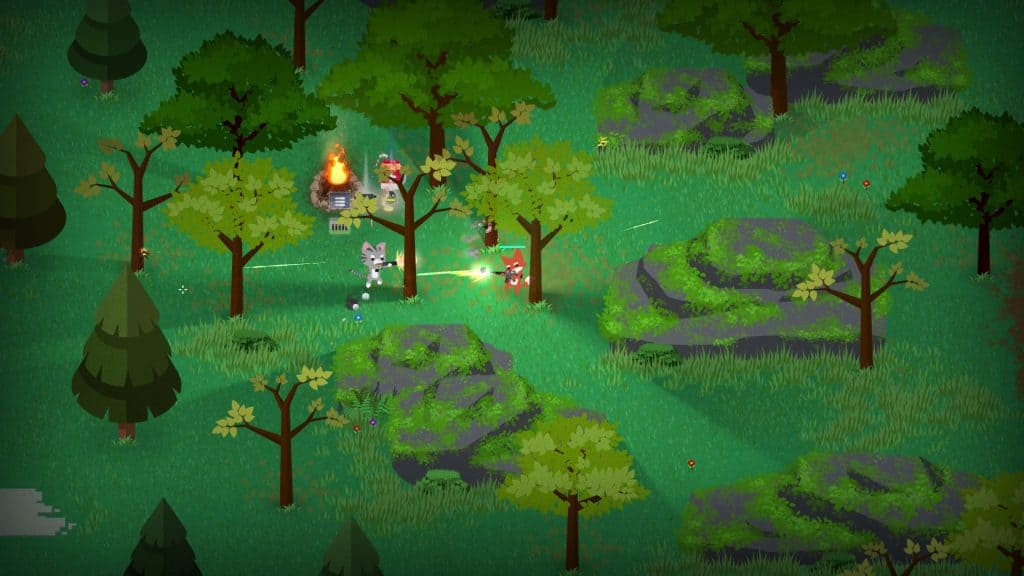 Super Animal Royale is another Steam Early Access game that is available for free. There is also a paid version which allows players to team up with friends. This option is not offered in the free version but players will have access to the full game and can play in the online multiplayer games for an unlimited amount of time.

The game is a 2D top down perspective game. Games can include up to 64 players as they fight to be the last animal standing. Players will create an animal character from a variety of species and can unlock more DNA to make new species. Players parachute in to the game area from a top a large eagle. All players come equipped with a katana sword but can find other weapons and items as they search through the environment. The shrinking zone in Super Animal Royale is poison gas that closes in on players as the game progresses.
Microtransactions: None | Where to Download: Steam | Official Site 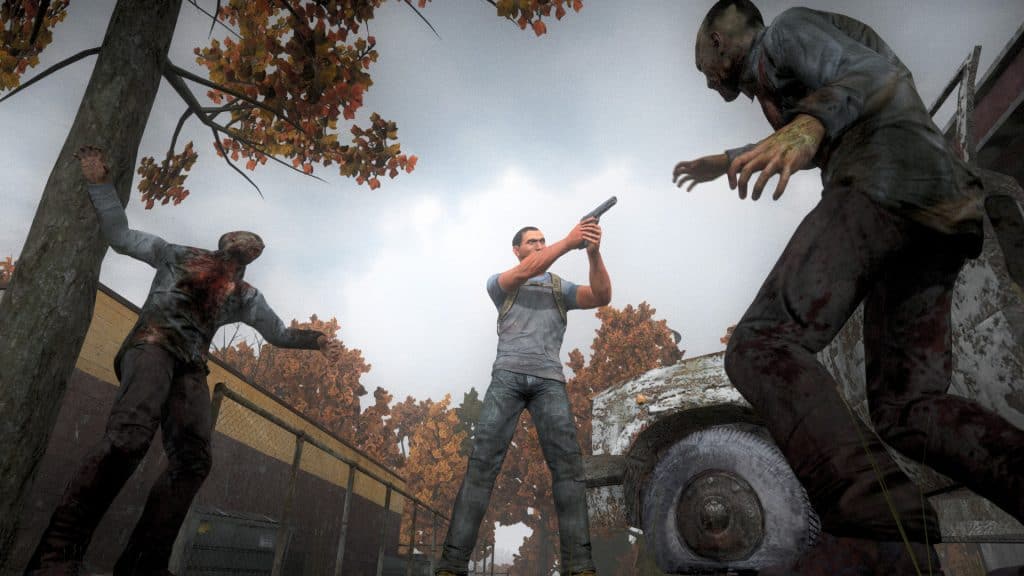 Z1 Battle Royale is a free to play game released for Windows PCs and PlayStation 4. It is formerly know as H1Z1 when it was initially released in 2018. There are plans to release the game to the Xbox One console as well.

In Z1, players parachute from a random location above the map and immediately begin searching for gear, unique items weapons and other things to defend themselves. The game map also includes vehicles that allow players to chance down opponents or make a quick getaway. The game also features a crafting system which allows players top combine items to make tools, armor, bandages and more. In addition to fighting other players Z1 also features zombies and toxic gas cloud slowly encircles players bringing them closer together. Z1 is available for the PC, Xbox One and PlayStation 4.
Microtransactions: Yes | Where to Download: Steam | Official Site 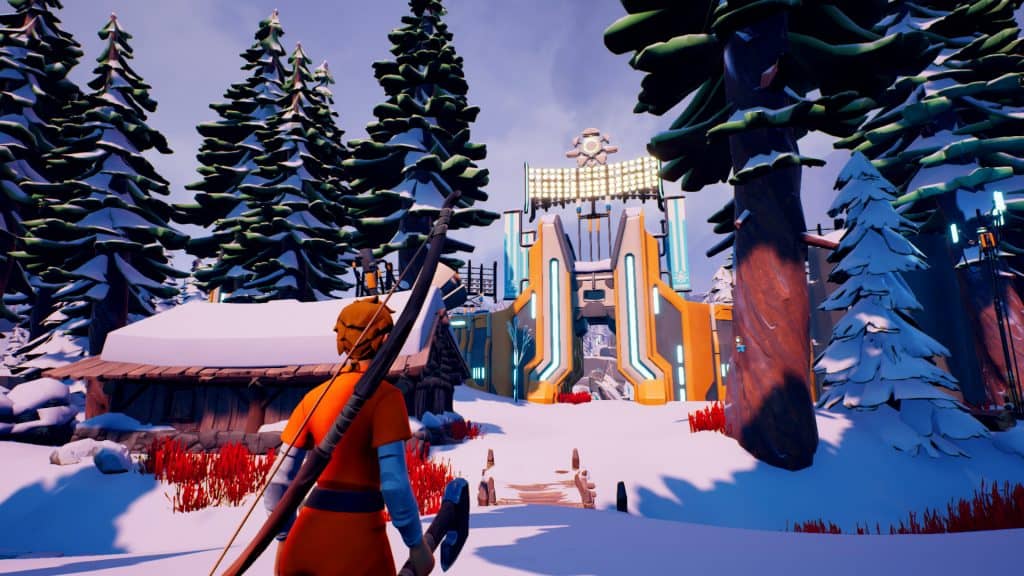 Coming in at number four is Darwin Project. This free to play game was released on Steam Early Access in 2019 with a full release planned for 2019. It is unknown if the game will remain free to play or not. It is also available on Xbox Game preview.

While not as big as other games, Darwin Project pits 10 players against each other across seven tiles or maps that are different environments. The game’s setting is a post-apocalyptic world in the Northern Canadian Rockies where a new ice age is imminent. What makes Darwin Project stand apart for other battle royale game is the 11th player know as the Show Director. Players are equipped with an ax and boy and can choose from a various traps, hooks, gliders and more to help with their survival. In order to win players must not only be the last man standing but also win over a voting crowd and the 11th player, the Show Director.
Microtransactions: None | Where to Download: Steam | Official Site 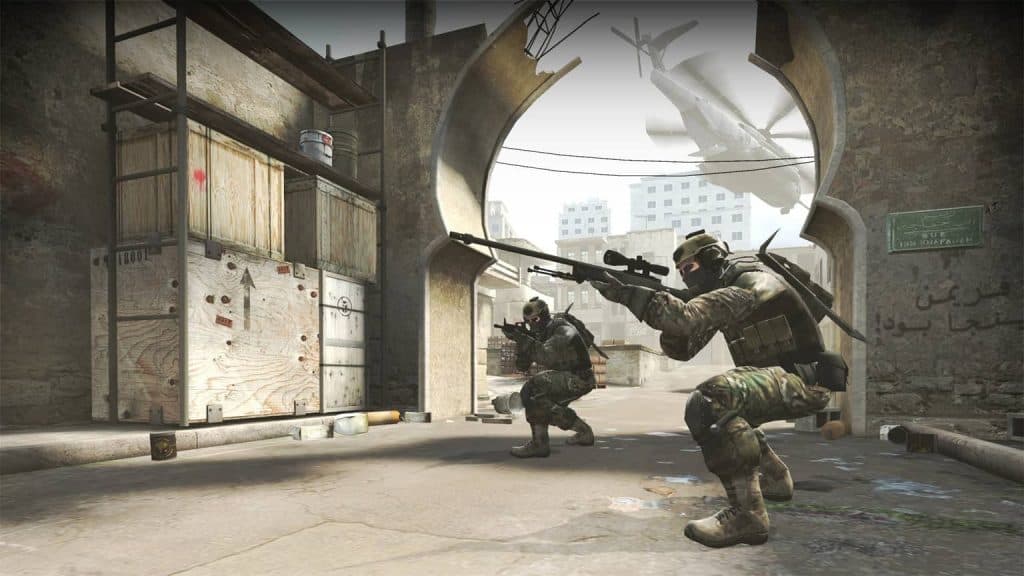 With the success of Epic Game’s Fortnite Battle Royale, Value Software has followed suit and is now offering a their flagship multiplayer shooter Counter-Strike: Global Offensive for free. CS:GO Danger Zone is the battle royale game mode and it comes in at #3 in our list of top free battle royale games. CS:GO Danger Zone offers fast paced battle royale game play and incorporates tactical shooter game play found in CS:GO. Players can play in solo or as members of two or three player squads. The game includes a number of achievements, badges and upgrades as you progress in game. Players who had previously paid for CS:GO have been upgraded to prime status, which can also be purchased by new players. Prime status includes some unique items/skins not available to players playing the free version.
Microtransactions: Yes | Where to Download: Steam | Official Site 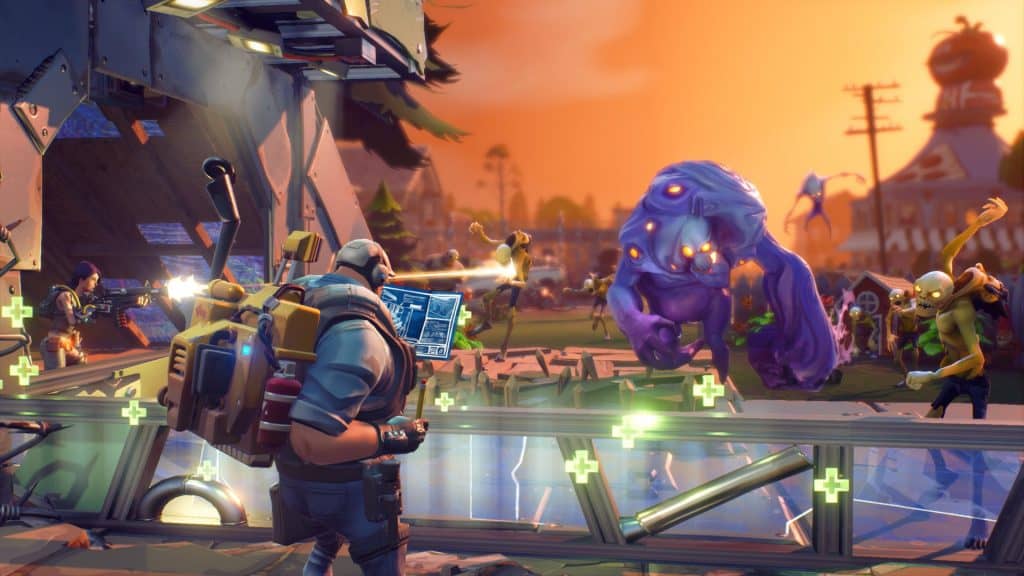 Fortnite Battle Royale is the game that help propel the game genre to one of the most popular world wide comes in at #2 in our list of top (and best) free battle royale games. Featuring three game modes, players can team up or play solo as they try to survive in 100 player battles. Survival instincts must kick in as soon as players jump from the flying bus. Scavenging for weapons and equipment to eliminate others while building your protective base with wood and steel.

Fortnite is available for the PC, Xbox One, PlayStation 4 and Mac OS. It includes a crafting system as well as microtransactions that allow players to spend in game currency on new skins, unique items and more. Fortnite requires Epic games digital distribution platform for the PC. Xbox One and PS4 owners can download from the respective online stores.
Microtransactions: Yes | Where to Download: Epic Games | Official Site 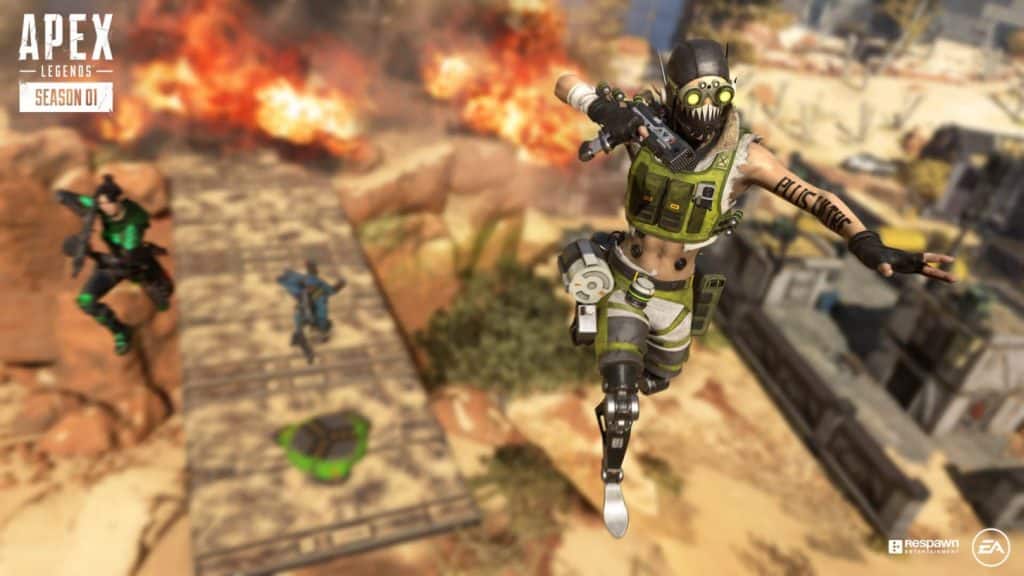 Apex Legends is the newest battle royale sensation to hit the PC and gaming consoles. It is also our top free battle royale game you should be playing. Apex Legends blends game play elements from class based shooters with battle royale game play. The primary game play objectives of are similar to Fortnite and other battle royale games but there are some unique aspects that help it stand out from the rest. Players get to choose from eight different character types with each character having unique abilities and strengths. Players will join teams of three players which allows for a wide range of strategic options combining different abilities and powers with other characters. The game also offers microtransactions which allows for quicker progression and unlocking of two of the eight characters. 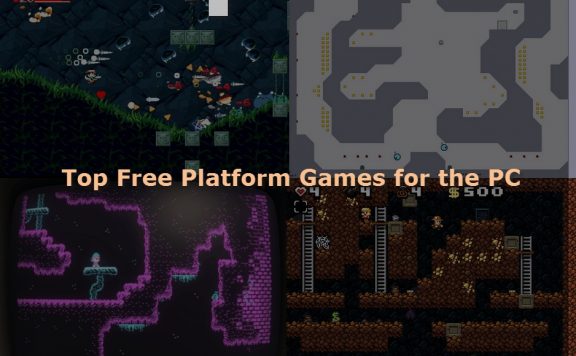 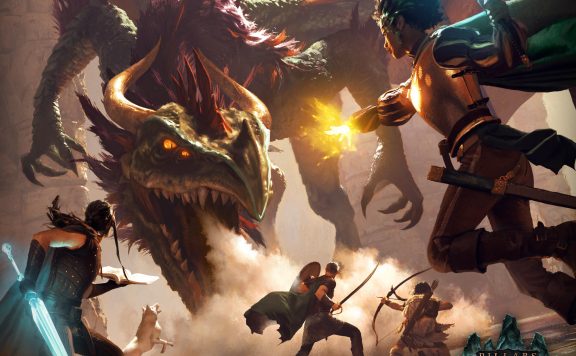